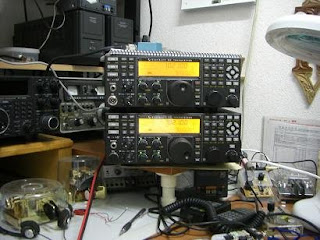 As I wrote the other day, my K3 #1070 had problem on receiving even after repair work in Elecraft.
I could not believe that, because the symptom is clearly observed only when decent real antenna is connected and receive real signals.
First I reported the fact to the person who carried out the repair work.
In response to my report he started to ask me "what is the symptom".
I thought "Oh please stop such story again?" so I just say the symptom is just the same as before repair and I sent same symptom report that was made before repair.
After that, no reply from that person.
Then I sent e-mail to a person in charge for the Sale department asking replacement of equipment. But no reply at all.

Then I deceided to sent e-mail to to-management both Eric & Wayne.
Wayne, N6KR replied immediately even it was midnight there in USA.
After several correspondences, Wayne decided to send new K3 for replacement.

It was arrived 3 days ago．
As soon as I opened the box, I connected power and antenna then received 40m band.
The receiver was OK!. But... transmit...problem again!! "END" message is always pop up on the sub LCD and cannot transmit.
What's happen!? Give me a break...
I read the operation manual but no instruction about "END" message.
I made initialize (EEINIT) but no change.
It was already midnight in Tokyo, so I took the symptom by video and reported to Wayne before sleep.
Next morning, new firmware version 3.15 had been arrived in my mailbox.
I installed the new F/W then the K3's transmit function became normal.
I sent e-mail telling everything seems OK to Wayne then rushed to work.

It was very log time and berden plus some extra expenses.
I regret why Elecraft could not find the symptom at the first repair.
It is clear that the repair return had been a wast of time and cost.
If they connect decent antenna placed outdoor and receive real world, I believe they could find the problem.

On the other hand, I really appreciate Wayne's great support.
He is really a trademark of Elecraft!!
Now I'm happy and can keep good impression on Elecraft.
Thank you very much Wayne.

PS. I hope Elecraft will not charge transportation cost for this case :-)
Posted by Atsu JE1TRV at 6:50 am