After one week investigation at local K3 holder's shack with Elecraft engineering support by e-mail, my K3's trouble is found as serious.

Following video clips are the comparison of bad K3 and normal K3 submitted to Elecraft engineer for their reference.

I appreciate Elecraft enginner's patient support everyday.
But unfortunately, no improvement obserbed.
I deceided to send my K3 to the factory.
Posted by Atsu JE1TRV at 4:38 pm 3 comments:

After long silence since Hamfair 2008 (Aug/2008), Marconi-Japan has finally announced their first products on 2009-03-08. That is a HF Transceiver Case Kit "Marconi TRX1A".
http://marconi-japan.com/default.aspx

It is Not a Transceiver kit but a Case kit.

At the time of Hamfair2008, the guy at the Marconi booth explained that they will provide transceiver kit.
Since I have been interested in their presentation at Hamfair2008, I've been confirmed the progress of their preparation time to time and I saw that they have been reducing their plan guradually and finally they decided to sell only CASE KIT.
It's disappointing.

The sales price of the CASE is 88200JPY. Expensive!!
They are going to sell 30 sets only without having stock.

I've been confusing the company name with the famous telecommunication company of "Marconi plc" in UK that had been bought by Ericsson few years ago.
But Marconi-Japan seems no relation with that. It looks like a private workshop or personal company.
Posted by Atsu JE1TRV at 6:23 pm No comments:

My K3 should go to hospital

Yesterday I took my K3 to a local friend Aki, JA1NLX who also has K3.
We made side by side comparison and found that my K3 is something like a compeletely different radio.
I left my K3 at Aki's home last night, according to Aki's report today, my K3 has too much distortion on all bands except 20m band.
He guess DSP board is suspicious and he suggested to contact Elecraft anyway.
So, I sent an e-mail to the Elecraft support today.
Posted by Atsu JE1TRV at 9:27 pm No comments:

My K3 is very poor 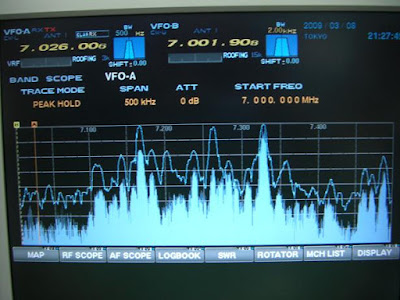 I made apple to apple comparison between K3, FT2000 and K1.
The band is 40m and the time is eveing in Tokyo Japan.
Above shot is a band scope snap on 40m band when I made the test.
The biggest peak around 7330KHz is a Broadcast whose signal strength is +60dB over S9 on my FT2K s-meter.

My son graduated from the high school today.