I've been a happy user of Traffie Hexbeam for about 5 years.
It works pretty good without any adjustment and any maintenance upto now.

This antenna has very unique hexagonal shape but realizes both very small foot-print and high gain at the same time.

Although the price for 5-band type is around 1100USD not so cheap, but it is reasonable when you consider the total system cost including tower, rotator, coaxial feeders, etc. You can enjoy 5 band with one antenna, one coax and small tv rotor with very low height! (see photo above which is extracted from Traffie's website) 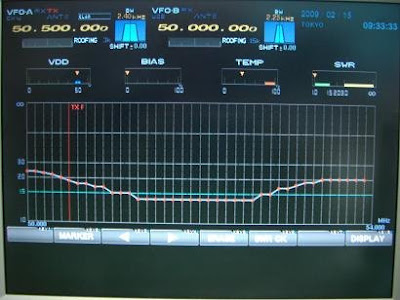 Here is the SWR of 20m band , antenna is HEXBEAM. 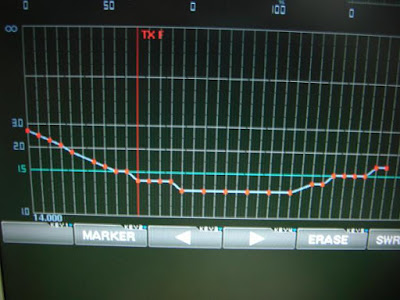 I bought normal setting HEXBEAM so that the SWR is optimized for phone band.
Posted by Atsu JE1TRV at 11:37 pm No comments:

The latest firmware has been released in Jan,2009.
Firmware update procedure is not announced officially in JA market.
That means Yaesu dose not allow Japanese cutomer to update the firmware of FT-2000 by themselves. If we did it, warranty of that equipment is terminated immediately, e even if the warranty period has not been finished yet.

Besides, in US it is opened and the latest firmware can be downladed free of charge from Yaesu America Website.

Update procedure is little bit complicated, but the step by step procedure is described in the Yaesu website, and my local friend, Jun/JQ1BWT who is an active electric engineer kindly helped me to do it.